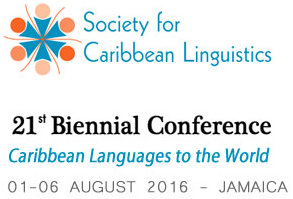 The Ibero-Romance clitic pronouns were not incorporated into Papiamentu (PA). Instead, PA has today several different possibilities to form reflexives, which replaced the Ibero-Romance clitics:  paña ‘cloth’, kurpa ‘body’, null reflexive, possessive + kurpa, object pronoun, object pronoun + mes < Portuguese mesmo ‘self’, and possessive pronoun + mes (cf. Muysken 1993:286). At least two other strategies of reflexivisation or quasi-reflexivisation are not discussed by Muysken: the use of kabes ‘head’ and of the reciprocal otro ‘other’. While some of those types of reflexives are a common strategy of reflexivisation in several creole languages (Muysken and Smith 1994:271-288), some of them can also be found in other Portuguese-based creoles. Therefore, this might indicate that there is a linguistic link between PA and those creoles when it comes to the realisation of this category of function words.

The aim of this presentation is to ponder on how specifically the reflexives with kurpa, possessive + kurpa, kabes, otro and mes are realised in PA and compare them to their equivalents in other Portuguese and Spanish-based creoles in order to establish if there are linguistic ties that connect PA to them when it comes to reflexivity.

Reflexives with kurpa and possessive + kurpa are also found in the Guinea Bissau and Casamance Portuguese creoles (GBC), which in turn are usually correlated with a Kwa / Bantu substrate (Jacobs 2012:130-131), but are also present in Asian creoles like Papiá Kristang (PK) and Zamboangueño (Holm 2000:225). Reflexives or quasi-reflexives can also be formed with PA kabes, which also encounters equivalents in GBC, Cape Verdean Portuguese-based creoles and PK. Another shared feature of PA with GBC and PK is the use of ‘other’ to express reciprocity, whereas a similar syntax for PA mes can also be found in the Cape Verdean creole of São Vicente, in Principense and in PK.

Interestingly, the analysis of the available data always points towards the same direction, since the current realisation of reflexivity in PA seems to be etymologically, and sometimes even through its grammatical functions, linked to other Portuguese-based creoles and to Portuguese, rather than to Spanish or Spanish-based creoles. Holm raised two possibilities for the presence of a reflexive with ‘body’ in Asian creoles, which also can be extended to the other reflexives mentioned above: that they either spread by diffusion or arose independently through the inﬂuence of other substrate languages (2000:225). Based on their similar realisation, especially in PK, the former rather seems to be the case.

Lecture in the series “Lifelong Learninig – Academic Lectures” – May, 17 2016 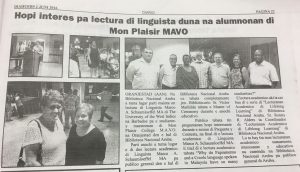 Some pictures of the two events:

The aim of this presentation is to make relevant considerations on the origin of Papiamento (PA). The discussion on the origins of PA still is object of controversy. Some scholars classify it as a creole language of Spanish origins and others as a creole of Portuguese origins. Recent historical and linguistic evidence suggests that PA owes its origins to the West African Portuguese creoles (cf. Jacobs, Origins of a Creole 2012).

In this presentation, the author provides further evidence in favour of the Portuguese origins of PA by doing an investigation on the historical and linguistic links existing between PA and Papiá Kristang (PK). Historical links are important, but linguistic data is the most reliable evidence of possible genetic ties between creoles. It may seem strange to compare a creole language that developed in Southeast Asia with a creole spoken in former Dutch colonies in the Caribbean, since they are worlds apart. PK, a Portuguese creole spoken in Malacca, Malaysia, is not directly linked to the West African Portuguese creoles like PA, but is a Portuguese creole undoubtedly unrelated to Spanish. This fact turns PK into an interesting tool of comparison to verify possible similarities and correspondences in the PA and the PK grammatical categories, and to establish if PA carries basic Portuguese creole features. The analysis is based on linguistic data from grammars, descriptions and texts in PA and in PK. The focus are grammatical similarities and correspondences that are observed in the structure of both creoles, and the implications these have to determine a possible common origin.

To achieve this objective, a comparison of important linguistic features in the two languages will be made. The evidence suggests that the origins of PA cannot be completely analysed and understood if vital historical and linguistic links to the Portuguese language are ignored. It remains open to discussion whether these ties were solely formed via West Africa and the Portuguese creoles spoken there or not. However, this presentation intends to discard any hypothesis that excludes the fundamental role Portuguese and Portuguese creoles played in the formation of PA.

A Comparison of Relators in Papiamentu and Papiá Kristang

Papiá Kristang is a Portuguese-based creole mainly spoken in Malacca, Malaysia, whereas Papiamentu is a creole mainly spoken in the Caribbean islands of Aruba, Bonaire and Curaçao (ABC Islands). The origin of Papiamentu still is controversial, since some scholars claim that it has genetic linguistic ties with Spanish, while others have sound evidence of its Portuguese origin, especially due to its links with West African Portuguese-based creoles (cf. Jacobs, Origins of a Creole, 2012, amongst others). The comparative study of the features of Papiamentu with Papiá Kristang still is a widely unexplored field. It is uncontroversial that Papiá Kristang is an Asian Portuguese-based creole with virtually no influences from Spanish or Spanish creoles. Therefore, if there are any similarities between Papiamentu and Papiá Kristang, those can certainly not be attributed to a Spanish common base in both creoles, but rather to another common base that they share, i.e., the Portuguese language. The main aim of this presentation is to compare and analyse relators in Papiamentu and Papiá Kristang. Relators are function words and as such pertain to the closed class words, which are much less likely to be replaced in borrowability or relexification situations if compared to content words, classified as open class words. The identification of the origin of relators can serve as indication towards linguistic genetic ties that might exist between creoles and the languages that were the base for their formation. The analysed relators will also be contrasted with the same features found in some other Portuguese and Spanish-based creoles in order to establish grammatical similarities and differences, and in doing so to investigate the origins of Papiamentu and the presence of Portuguese and Portuguese creole features in this creole language that today is recognized by the Dutch government in Bonaire and has official status as native language in Aruba and Curaçao.

Translating the Presence of Portuguese in a Caribbean Creole. Why are there similarities between an Asian Portuguese Creole and Papiamentu?

Presentation at the Translating Creolization Symposium – May 27-29, 2015. The University of the West Indies, Cave Hill Campus, Barbados

Abstract
Papiamentu (PA) is a creole spoken as main language by the majority of the population in Aruba, Bonaire and Curaçao, and is official language in the first and in the latter. The origin of PA is controversial; a group of scholars attributes it to Spanish, due to its current lexical and phonetic similarities with Spanish, whereas another group sees linguistic genetic ties with Portuguese.

The aim of this presentation is to investigate the historical and linguistic links that might connect PA to Portuguese. Whereas historical links set the stage for eventual ties, possible grammatical commonalities in the very fabric that makes up the structure of PA may be strong indications of a genetic connection to its ancestor. Recent historical and linguistic evidence suggests that PA owes its origins to the West African Portuguese creoles. To further strengthen this evidence, this presentation will analyse key grammar elements such as function words, relators, verbal system and Time-Modality-Aspect markers, which are core elements and very strong indications of genetic ties, given their very low borrowability in contexts of relexification and formation of creoles. The analysis is done by means of comparing these PA core elements with those found in Papiá Kristang (PK), an Asian Portuguese Creole spoken mainly by only a few hundred persons in Malacca, Malaysia. It is consensus that PK is undoubtedly linguistically unrelated to Spanish. If there are similarities between PA and PK, then these can therefore not be attributed to Spanish. Although PK is used as tool of comparison, parallels with Spanish, Portuguese and other Spanish and Portuguese-based creoles will be made to establish a more comprehensive picture of possible linguistic ties between PA and Portuguese.

The evidence suggests that PA cannot be comprehensively analysed and understood if vital historical and linguistic links of this Caribbean creole to the Portuguese language are ignored.

What do Aruba, Bonaire and Curaçao have in common with Malacca? Historical and linguistic links between Papiamentu and Papiá Kristang.
Marco Aurelio Schaumloeffel

What do Aruba, Bonaire and Curaçao have in common with Malacca? Historical and linguistic links between Papiamentu and Papiá Kristang.

The discussion on the origin of Papiamentu (PA) still is controversial, since it is classified by some scholars as a Spanish Creole and by others as a Portuguese Creole. However, recent historical and linguistic evidence trace back its origins to West African Portuguese creoles (Jacobs 2012, among others). This leaves little space to speculate if PA owes its origins to a variety or varieties of Spanish, but there still are many scholars who claim that PA is supposedly of Spanish origin.
The aim of this paper is to provide further evidence in favour of the Portuguese origin of PA by doing a unique investigation on the historical and linguistic links existing between PA and Papiá Kristang (PK). Historical links set the context, but linguistic data is naturally the most reliable evidence of possible genetic ties between creoles. At the first instance, it seems strange to compare a Portuguese creole  developed in Southeast Asia with another creole spoken in former Dutch colonies in the Caribbean, since they apparently are worlds apart.
Nevertheless, PK can ideally be used in this context, since it is a well-known and studied Portuguese creole that has virtually no Spanish influence. And if there is virtually no Spanish influence in PK, then the comparison between PA and PK may be an ideal tool to establish if PA really carries Portuguese features. Only a careful analysis can reveal if grammatical similarities are present in the structural fabric of both creoles.
The linguistic features that PA shares with PK will be analysed and compared in this paper through four relevant aspects of grammatical categories: Formation and use of TMA markers (Tense, Mood, Aspect), the multifunctionality of the lexical item ‘ku’, word reduplication and its grammatical functions, and analysis of two auxiliary verbs.
The evidence indicates that the origins of PA cannot be comprehensively analysed and understood if vital historical and linguistic links to the Portuguese language are ignored. These ties were formed via West Africa and the Portuguese creoles spoken there, and possibly also influenced by the immigration of Sephardic Jews and their servants from Dutch Brazil to Curaçao. Despite not being genetically linked to West African Portuguese creoles, but because it is a Portuguese creole undoubtedly unrelated to Spanish, PK acts as an ideal tool of comparison in this case. As result, this paper definitively refutes any hypothesis that excludes the fundamental role of Portuguese and Portuguese creoles in the formation of PA.

What do Aruba, Bonaire and Curaçao have in common with Malacca?
The historical and linguistic links between Papiamentu and Papiá Kristang